The visit of representatives from 23 US Universities, which took place on Tuesday, November 8, 2022, is a milestone in the outward-looking course that the Aristotle University of Thessaloniki has been following in recent years.

The Rector of AUTH, Professor Nikolaos G. Papaioannou, welcomed the Managing Director of the Institute of International Education (IIE) of the USA, Allan E. Goodman, and the numerous delegation to the KEDEA of AUTH. In the meeting that followed, Mr. Papaioannou presented the structures, areas of activity and research programs implemented at AUTH, as well as their impact on the development of the city.

“This is a very important visit of colleagues from the USA with the aim of strengthening and expanding the partnerships we already have with American Universities, as well as developing new ones. Aristotle, the University of extroversion and excellence, partners with academic institutions from around the world, offering expanded perspectives to members of its University Community. With the meeting with the representatives of the American Universities, an even greater “opening” of our University to the global academic community is attempted, which strengthens the mobility of our students, the international recognition of the quality of AUTH’s studies, the research produced within it and the prestige of its human potential”, points out the Rector of AUTH, Professor Nikolaos G. Papaioannou.

The Vice Rector of Academic Affairs and Student Affairs of AUTH, Professor Dimitrios Kovaios, during the meeting, presented Aristotle’s international collaborations, especially those that exist with US Universities, while emphasizing AUTH’s participation in the alliance for the European University ” EPICUR’.

For their part, the representatives of the American Universities briefly presented each University and the areas of interest for the development of partnerships.

The meeting was also attended by the Vice Rector of Finance, Planning and Development of AUTH, Professor Charalambos Feidas, and the Deans of Aristotle University.

The Aristotle University of Thessaloniki was visited by a delegation from the following Universities:

Attached are photos from the visit. 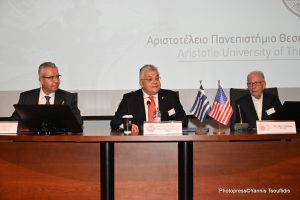 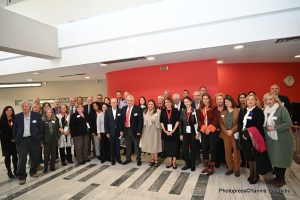 Photo 2: (in the center) the Rector of AUTH, Professor Nikolaos G. Papaioannou, (left) with the Managing Director of the US Institute of International Education, Allan E. Goodman, Deans and Deans of AUTH and the members of the delegation of American Universities .